There’s a lot of good fantasy novels out there. It doesn’t help that fantasy authors are frequently among the most prolific writers in genre, churning out a book a year or more for decades.

When you find a fantasy author you like it’s all too easy just to stick with them. These books are ones you might not have heard of. But each of them is a brilliant work – what’s more, they represent some of the more unusual and challenging stories in fantasy.

1.  The Pattern Scars by Caitlin Sweet

Ever meet a book that can break your heart? This is one of them. My immediate response to the story is that it reminded me, in the telling, of Le Guin. There was a similar ephemeral quality to the prose.

However this story of prophecy, murder and betrayal is much darker than Le Guin’s books. In Nola, Sweet has created a beautifully realized protagonist, one whose vibrancy radiates throughout the story. And because Nola shines so brightly you feel the pain of her tragedies ever more sharply.

This book is not an easy book. It is however achingly beautiful and if you haven’t read it you should now.

2. Bridge of Birds by Barry Hughart

Fair warning: this one is a little difficult to track down.

It’s not available as an e-book nor was it available in print in any bookstores I could find. Ultimately I had to order the book online and then waited two agonizing weeks while Canada Post promptly lost it.

But it was worth the wait. Barry Hughart deftly accomplishes something which all too few fantasy authors attempt. He creates a fantasy story set in a world that is not based on mediaeval Europe and succeeds.

Basing his world loosely on Tang dynasty China, Hughart manages to weave together Chinese folk stories and a strong historical understanding of the first Chinese imperial renaissance without allowing the details to overwhelm his work.

I loved Under Heaven and River of Stars by Guy Gavriel Kay and I don’t want this to sound like an indictment of either of these books, but Hughart employs a defter touch with his use of myth and history. He’s comfortable and confident enough with the historical material he uses to throw caution blithely to the wind.

This willingness to take risks allows him to create a romping adventure in which a dissolute and possibly immortal scholar (he claims not to be but he’s far older than any reasonable person ever could be) and an innocent peasant take on the roles of Holmes and Watson, solving an ancient mystery while engaging in daring do such as a steampunk helicopter escape from a giant invisible spider.

With inveterate scholasticism and bizarre flights of fantasy it’s unsurprising that Bridge of Birds won several awards when it was originally published. And yet, the publishers had trouble marketing the book and Hughart eventually withdrew from writing after only three novels.

I’ve got a soft spot for a coming of age story and this one is a doozy.

A bitter-sweet story about class and privilege, fear of the other, sex and death, Wild Girls is not an ordinary YA novel. I was lucky enough to have a chance to hear Atwell reading from Wild Girls. I say lucky because I might not have ever picked the book up if I hadn’t.

But I’m glad I did. This is the way urban fantasy is best done – with a light touch to the spectacle and a heavy dollop of characterization. Wild Girls is a true pleasure to read. If you haven’t read it yet I strongly suggest you read it right now. 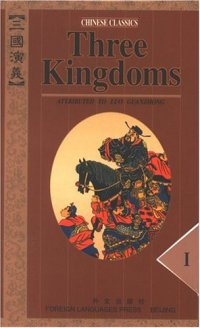 Ok, this one is stretching the definition of fantasy a bit in that it’s a historical novel written in Ming Dynasty China. It is, in fact, one of the earliest true novels ever written anywhere and more people should read it for that reason alone. Happily a very good translation was published by Beijing Foreign Language Press. It may be difficult to find but I would suggest perseverance.

Why do I call Three Kingdoms a fantasy novel? The truth is that it entirely pre-dates such a thing as genre distinctions. That being said, the fusion of myth and history, the inclusion of the deification of Guan Yu and the lasting influence that this book had on the fantasy stories of Asia all point towards a novel which is closer to fantasy than any other modern genre. The novel can ultimately be summed up by the author’s thesis:

“The Empire, long divided, must unite: long united, must divide.”

It chooses as its protagonists not the ultimately victorious Cao Cao (who makes for one of the most exceptional villains in the history of literature) but rather the oath garden brothers Liu Bei, Zhang Fei and Guan Yu. By choosing to frame history through the lens of the most legendary figures (and also the least successful figures), the Three Kingdoms became a bit of a subversive story.

That element of subversion has led to it becoming one of the most frequently cited stories within Asia, spawning countless movies, video games, television shows and literary works.

5. Above by Leah Bobet

Returning to the present day, Above is another Young Adult entry on this list. This unapologetically Torontonian story (you can even see the CN Tower front-and center on the cover) plays out similarly to some of the works of Neil Gaiman as it tracks the slightly magical outcasts who live in the catacombs beneath the city.

Above brings sensitivity, strength and a strong political consciousness / conscience to the genre. Bobet understands how to infuse a Young Adult novel with her passion and her ethics without ever becoming bombastic or heavy-handed.

Furthermore her protagonists, a boy with the features of a lion and an artist’s soul, a wounded girl who is also a bee, a man whose touch is electric and several more are well realized, beautiful, flawed, monstrous and heroic. If you don’t already own a copy of this book you should buy it right now.