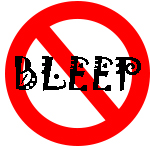 Gentle reader, as you likely know as a subscriber to my blog I am an author. I write things, make, to a certain definition of it, art with my words.

And now these fuckers over at Clean Reader want to go in and change my words with ones they find less objectionable.

So let’s talk a bit about my book, the Black Trillium. It’s a new adult novel. That means I’m gearing it toward an audience basically from 16 to 25, with the possibility of people older than 25 might also like it.

Total instances of foul words: 40, or roughly 0.034% of my words, probably somewhat less than the foulness of the average late-teenager.

And most of the alternate words I could think of don’t occur, although the word “witch” appears twice.

So you might say, it’s unlikely that anybody would get confused by the word replacements, your story will remained intact.

I write in multiple first person. The language I choose throughout the entire book is designed to reveal something about the character of the narrator for that chapter. These revelations of character include things like the circumstances under which the characters swear and the sort of swear words they use.

The character who castigates two other protagonists for “waving their dicks around” wouldn’t be the same if she instead criticized them for “waving their thoughts around,” or whatever else Clean Reader decided was less objectionable.

Likewise it’d be a substantial change to character if somebody always cursed by saying “poop.”

Characters are central to story. The story can’t exist without them. And when you mess with the characters you are fundamentally altering the story.

Now recently I delivered a discussion regarding Gamergate and Sad Puppies where I pointed out that all art enters into the realm of political discourse by way of being public speech.

When Clean Reader interferes with the characterization of my characters, and thus muddies my themes, they are making a change, no matter how subtle, to the nature of that public speech.

It’s not censorship, not from the definition I use of what constitutes censorship, but it is academically dishonest, blatant and deliberate misquotation; and that’s a dangerous garden path to dance down all of its own.

Writing a book is a deliberate process.

So is reading one.

And I’ve always been of the opinion that one should think carefully about what they read and why. Certainly the language the author uses is a fair consideration.

When you let people bleep the fucks out of stories you are facilitating a lack of deliberateness in reading, a laziness regarding content.

So what do we have?

Maybe start painting bras on all those old paintings by Titian. Oh wait, I mean “Mammary”ian. I wouldn’t want to swear.